How to Spot the Bad Guys 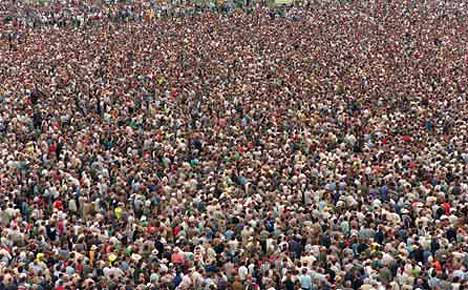 Remember those old “western” movies where the out-numbered good guys needed to liberate a town or other location where the bad guys were in charge?

If there was a herd of cattle nearby, you could be sure that our good guys would stampede them thru the bad guy’s positions and, riding among the terrorized cattle and through swirling dust with six-guns blazing, shoot down the bad guys.

Cattle…  because only bad guys would deliberately terrorize and stampede PEOPLE, right?

In more modern “action-adventure” movies, the bad guys WILL, sometimes, do just that, firing guns into the air or into innocent people to cause them to stampede, and then the bad guys either shoot our heroes or escape in the confusion.

In the movies, and in real life, bad guys stampede people, or people run from bad guys because… well, they’re bad guys.

Good guys who are also smart guys know this.

Bad Guys who are also smart guys know that good guys don’t actually LIKE shooting innocent people or treating them like cattle.

Good guys have rules of engagement and humanitarian ideals strong enough that they will sometimes actually endanger themselves rather than harm innocents or unfairly take away their liberties, even in life-or-death situations.

Bad Guys have consistently used these facts about good guys against them.  In fact, they so consistently do it, that it is one of the easiest ways to identify the bad guys.

Bad guys control and use and terrorize people to further their own designs, without regard to their humanity or their rights… they treat them like cattle.

In asymmetrical warfare, this is so much a tactic of certain “insurgencies” and nation-states as to be doctrinal… to be a PREFERRED tactic.

Mao said the insurgent should swim among the people like a fish in the sea.

Already in power, Saddam Hussein had his “human shields”, locating key capabilities in residential neighborhoods and, literally, under or in schools and hospitals.  He held non-combatants hostage in his “palaces”.  During the war to depose him, Iraqi soldiers “ditched” their uniforms and fired on coalition forces from among groups of woman and children, or from schoolyards or mosques.

Taliban, Al Qaeda and Daesh fighters also do this.

You may be certain that in the vast herd of refugees fleeing the fighting and the Daesh “bad guys” there are several people who are not FLEEING war and violence… they are BRINGING it.

This is not a prediction, it is an observation.

Ask the Parisians…  Ask the British…  Ask any veteran of combat or counter-terrorism operations in the Middle-East, Africa or, for that matter, in the United States.

Some, who will come to “the west” innocently, as young adults or as the children of refugees or immigrants, will BECOME terrorists, radicalized HERE, by useful idiots in our schools who teach hatred of our values and institutions and lie about the causes and sources of inequality and unfairness in our societies.

Some will become radicalized in mosques, in jail, or on the internet by Islamic recruiters allowed to spew their hatefulness with little or no intervention from authorities, because the good guys are… well, they’re good guys.

This, also, is not a prediction, it is an observation.

Ask the Kenyans, the British, the French, and the troops and citizens of Ft. Hood, Texas or at the Naval Reserve and recruiting stations in Tennessee and Arkansas, and… well, you get my point, by now, or you never will.

They will become radicalized because the set of beliefs that we call Islam is both a faith and a POLITICAL system, and has been spread by coercion and violence, as well as persuasion, since Mohammad stalked the earth.  It is incompatible with the Human Rights Standards of the Western World and the rule of secular law.  People who have been raised with this set of beliefs or adopt them seem to be easily persuaded into violence, because any perceived injustice or conflict with others can be characterized as being because of the “infidelity” (unbelief or wrong belief) of those others.  And, “good” Muslims may lie too, cheat, and even kill “infidels”, according to their book.  Consequently, the most prolific murderers of Muslims, throughout the history of Islam, have been OTHER Muslims.

Again, that’s an observation, not a theory or a prejudice.

The world needs to help the refugees displaced by the bad guys, but we don’t have to move them halfway around the world to do that, and we don’t have to be stampeded into strategically and tactically unsound responses by their terror, or by our own.

See the truth of the real threat and the potential for so much MORE suffering beyond the suffering of the refugees.

Peer thru the dust; look carefully at the thundering herd, and beyond it.

Keep calm, aim straight and remember to pray for everybody involved.

Be one of the SMART good guys.

God Bless those who have compassion for ALL the people and work and fight for them.