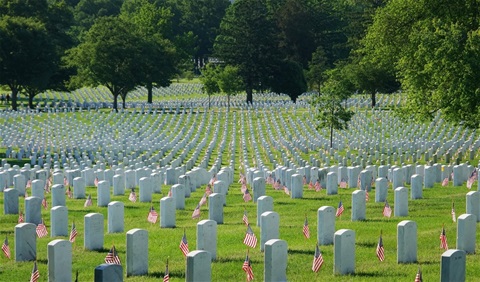 During this Memorial Day weekend, some of my Facebook friends (mostly veterans) expressed some dismay that people seemed not to recognize the difference between Veterans Day and Memorial Day, because people kept thanking them for their service.
One said that he found that embarrassing, because the day is supposed to be about those who “gave the last full measure of devotion” – not about servicemembers or veterans that you can walk up to and thank; you see, most of us who’ve survived our service are acutely aware that others have given much more than us.
I suggested to one dear “sister” that people were thanking her because they didn’t know how to properly thank those who are no longer “here” to thank, and my own words set me to thinking.
How can we properly “memorialize” those who’ve given their lives for this country?
How about:
If you wish to honor their sacrifice, you can do that, at a much “cheaper” price, by simply spending a little more time thinking about the people around you and sacrificing (just a little) for them.
I’ll tell you a soldiers secret – in the extremes of battle – most people, including those who died, weren’t thinking (if they had time to think) about “God, Mother, and Apple Pie”, or the constitution they had sworn to protect and defend – they were thinking about their buddies -- about the soldiers, sailors, Marines, airmen, or others around and “behind” them.
So, be a little more like that: sacrifice some of your time; get out of your “comfort zone” and give of yourself for others.
Do something “nice” for somebody else, today and every day.

Put some “old-fashioned” courtesy back into your dealings with the people around you; cut somebody some slack in traffic, refrain from talking on your phone while driving, say “please” and “thank you”, be slower to criticize and quicker to complement, pick up a piece of trash and put in a can, take some time away from the talking heads and research the issues on your own, find some sort of “community service” and support it, do something that’s helping make your community and country a little more like something worth dying for.

Although I hesitate to speak for those who gave so much more than I, I think that they’d think that that’s thanks enough.