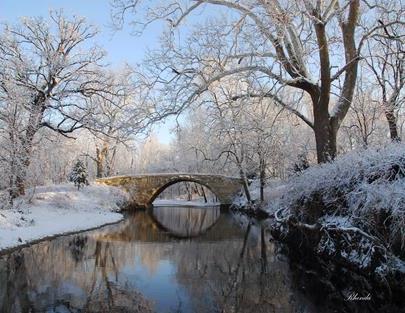 "Since we have been justified through faith, we have peace with God through our Lord Jesus Christ." -- Romans 5:1

Those who know God have great contentment in God.

There is no peace like the peace of those whose minds are possessed with full assurance that they have known God, and God has known them, and that this relationship guarantees God’s favor to them in life, through death, and on forever.

This is the peace that Shadrach, Meshach, and Abednego knew—hence the contentment with which they stood their ground in the face of Nebuchadnezzar’s ultimatum.

Their reply is classic (Daniel 3:16-18): “O Nebuchadnezzar, we do not need to defend ourselves before you in this matter.” (No panic!)

“If we are thrown into the blazing furnace, the God we serve is able to save us from it, and he will rescue us from your hand, O king.” (Courteous but unanswerable—they knew their God!)

“But even if he does not”—if no deliverance comes—“we want you to know, O king, that we will not serve your gods.” (It doesn’t matter! It makes no difference! Live or die, they are content.)

Reflect: What is your level of contentment? On what is it based? Pray about your findings.

Finding peace and contentment in our faith isn’t an academic exercise for Christians in many parts of today's world, either.

Muslims and Hindus and even Buddhists are demanding apostasy from people of other faiths, sometimes on pain of death or indefinite imprisonment, or just killing Christians and others they think of as "infidels" or “western” or whatever “believers in what we have declared wrong things” are called in their local cultures, without any discussion of alternatives.

Persecution, prosecution, enslavement, and murder of Christians is at unprecedented levels, worldwide, even as the number of Evangelical and other Christians in Asia, Africa, and South America continues to grow.

Ironically, it seems as though it is in North America, Europe, and Eurasia that less persecuted Christians are voluntarily surrendering their born-again birthright of peace that passes understanding, hope, and “blessed assurance” to the pressure of continually redefined new age standards of malleable truths, collectivist prejudices, and “social justice” bigotry; we are told the standards of our faith are based in ignorant intolerance, even “hatefulness”, so extreme as to, perhaps, even require “reeducation” (a la “the killing fields”, the “gulag archipelago”, or the National Socialist’s “camps”, perhaps?), but definitely requiring active censorship and repression.

We are pressured, under definite and increasingly less vague threats, to surrender God-given rights “to the general welfare”; to accept the murder of the defenseless and the subordination of girls and boys, women and men to a perverse and nonsensical agenda of “sexual liberation” and subjective gender identity, and to surrender standards of justice to collectivist social-engineering theories; we are pressured to surrender the truths of our personal and collective histories to the “critical” social theories of atheistic Marxists.

And, too many of us are succumbing to the pressures.

I remember being told by a missionary returning from a (large, aggressive, Asian, and totalitarian) foreign country, which shall remain unnamed because unapproved Christian missions are “not allowed” there, that the Pastor of a clandestine “House Church” in that nation wanted we “American” Christians to know that they were praying for us.

That Pastor said they prayed for us because they knew it was easier for us to drift away from contentment with the presence and promises of our Lord and Savior without the incentives of the kind of persecutions they face, in that we weren't being, daily, confronted with a clear choice between our secular and politically-correct culture and the ways of true Discipleship.

Perhaps, then, it’s a blessing that our society has become so bizarrely warped and polarized in recent years.

Current circumstances certainly serve to highlight the existential differences between the Word of God we claim to believe and follow, and the standards and values of the broken, bleeding, and dark world we live in and are called to help illuminate and heal, as best we can, until our Lord returns.

I’ll pray for you and yours, and I hereby solicit your prayers for me and mine, that we may remain faithful and receive the wisdom, discernment, and strength to continue to speak the truth, lovingly, kindly, but with the boldness and assurance of Hananiah, Mishael, and Azariah (whom the Babylonians called Shadrach, Meshach, and Abednego) no matter what the intolerant and self-appointed thought-leaders of our society choose to call us, and no matter what those with secular power threaten or actually do to us.