"Touched in the Head", by the Grace of God 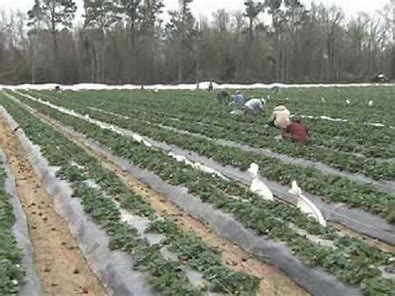 The two fastest harvesters in the Arkansas strawberry field were an old, black man, wearing a beat-up and sweat-soaked wide-brimmed straw hat, and worn-out, patch-covered coveralls over a frayed and antique-looking shirt with the collar torn off, and a “tween” skinny white boy, in jeans and a t-shirt, in the next row over, trying desperately to crawl along on hands and knees, as the old man did, and pick the berries as fast as the old man was doing.
They were faster than the other workers in that field to fill the baskets they were paid to fill for two reasons; first, the old man had described to the kid, when asked how it was that he was faster at it than all the others, how to judge the ripeness of the berries by touch, and because neither he nor the kid paused to eat any of the berries, as most of the other workers did, at least occasionally, as kind of an additional “fee” for their labors.
The other laborers also seemed to "shy-away" from the raggedy old man, because they thought him a bit “theched” (hillbilly idiom for “touched”, short for “touched in the head”, or “crazy”). They thought him a bit “off in the head” because he constantly muttered as he moved down the rows of strawberry plants, picking rapidly, and efficiently moving his box of boxes, and a sharpened hoe-blade, with a handle cut down to about eight inches, which he often repositioned as he picked so it was always close to his callused right hand.
Although it was a struggle, the boy was able, at one point in his own efforts, to get close to the “heels’ of the old man as they moved down adjacent rows.
He could hear the man muttering, but was unable to make out any specific words, until the old man suddenly grabbed the foreshortened, sharpened hoe, and struck a snake that had been sheltering under the leaves of the row he was working, neatly decapitating it.
The boy recognized the still-writhing body that wriggled into the space beside the row he was working as that of a “copperhead” and was able to make out the old man’s words, for the first time since he’d answered his question about how to pick so fast and so well.
After the lightning-fast strike of the hoe-blade, the man said, clearly, “Hallelujah – thank Ya, Lord”, then returned to his muttering, and his picking, moving boxes and hoe, and crawling down the row.
As the boy followed, he began to make out more of the sotto-voiced words the old-man was uttering; the words “Lord” and “Father”, became intelligible, fairly frequently.
Finally, he recognized that the man was taking the biblical injunction to “pray without ceasing” quite literally, and was conversing with God, even pausing in his mutters occasionally, then recommencing them with a “thank you, Lord…”, as he worked.
The boy, now an old man himself, can also, sometimes, be found to be muttering in a similar way, being similarly “theched"; “Hallelujah, thank you, Lord,” for Your touch, and Your grace.